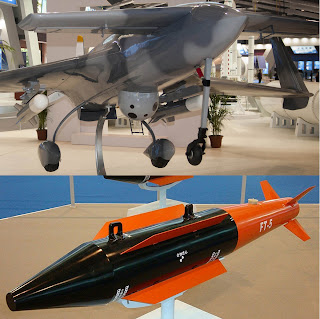 Islamabad and Beijing inked two new military procurements contracts during the December 17-19 visit to Islamabad of Chinese Premier Wen Jiabao last year, which included the purchase of 20 CH-3 unmanned combat aerial vehicles (UCAV) and FT-5 small-diameter bombs for the Pakistan Army’s Aviation Corps, and the first two of up to six Type 022 Hobei-class catamarans for the Pakistan Navy (PN). The CH-3 is a medium-altitude long endurance (MALE) unmanned platform developed by the China Aerospace Science and Technology Corp (CASC). It comes equipped with a belly-mounted turret housing optronic sensors, and twin wing-mounted hardpoints for carrying two 75kg FT-5s. The CASC claims that the CH-3 is capable of battlefield reconnaissance, fire adjustment, data relay, intelligence collection, ground-strike missions and electronic warfare missions. The MALE-UCAV has a cruising speed of 220kph, 12-hour maximum endurance, and a 200km communications radius. The FT-5 small-diameter bomb contains a 35kg (77lb) warhead, and has a circular error probability of 15 metres, or less than 50 feet. Its effective glide range is up to 5km (3.1 miles) when launched from the CH-3 UAV. The other members of the FT family--the 500kg (1,100lb) FT-1, 500kg FT-2 with gliding fins, and 250kg (550lb) FT-3 bombs--are all GPS-guided and have already been ordered for the Pakistan Air Force’s JF-17 Thunder multi-role combat aircraft.
Meanwhile, determined to maintain its qualitative superiority in undersea warfare over its Indian counterpart, the Pakistan Navy (PN) has embarked on an ambitious force modernisation programme in partnership with DCNS of France and the China State Shipbuilding Industrial Corp (CSIC). Presently, the Karachi-based state-owned Pakistan Navy Dockyard, with DCNS’ assistance, is cutting open the pressure hull of the PN’s first of two double-hulled Agosta 90B diesel-electric submarines (SSK)—the 2,083-tonne PNS Khalid—so that it can accommodate a module containing the DCNS-supplied Module d’Energie Sous-Marine Autonome (MESMA) air-independent propulsion (AIP) system. Installation work is due for completion by the year’s end, following which the PN’s second Agosta 90B SSK—PNS Saad, will be subjected to an identical refit next year. The PNS Khalid was commissioned into service on 21 December 21, 1999, while PNS Saad--the first Agosta 90B SSK to be licence-assembled at the Pakistan Navy Dockyard under a Transfer of Technology (ToT) agreement with DCNS, was commissioned on December 13, 2003. The third Agosta 90B SSK--PNS Hamza--was commissioned on September 26, 2008 and it was fitted from the outset with a MESMA module, thereby becoming the first SSK in South Asia to be equipped with an operational AIP system. 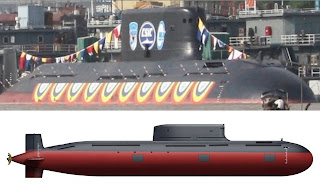 With CSIC, the PN early last month inked a contract under which the CSIC’s Wuhan-based Wuchang Shipyard will supply six Type 041A Improved Yuan-class SSKs, all of which will be equipped with a Stirling-cycle AIP system. The double-hulled Type 041A SSK, with a submerged displacement close to 3, 600 tonnes, bears a close resemblance to the Russian Type 636M SSK, and features hull-retractable foreplanes and hydrodynamically streamlined sail. The first such SSK was launched at Wuhan Shipyard on September 9 last year, and a total of three such SSKs are on order from China’s PLA Navy. This development effectively puts an end to the PN’s three-year-old efforts to procure new-generation SSKs worth US$1.2 billion from either France or Germany. It may be recalled that France had in July 2006 cleared DCNS to offer three single-hulled Marlin-class SSKs to Pakistan, but matters did not proceed further as the PN had been insisting that the to-be-acquired SSKs be modified to fire Boeing-built RGM-84A Harpoon ant-ship cruise missiles (the three existing Agosta 90B and two 1,043-tonne Agosta 70 SSKs of the PN are presently configured to fire only the MBDA-built SM-39 Exocet anti-ship missile). Subsequently, from 2008 onwards the PN zeroed in on the single-hulled Class 214 SSK built by Germany’s Howaldtswerke-Deutsche Werft (HDW), but the balance tilted in favour of CSIC early this year when Beijing offered the Improved Yuan SSK, something that the PN’s Chief of the Naval Staff Admiral Noman Basheer and Pakistan’s President Asif Ali Zardari have since wholeheartedly embraced. However, in an effort to mollify the French, a high-level PN delegation visited France on April 27 last year to begin contract negotiations with DCNS concerning the upgrading of the PN’s two existing Agosta 70 SSKs. This contract was inked last June, and includes the installation of SUBTICS combat management systems on the two SSKs.
The AIP system for the Type 041A Improved Yuan SSK was developed by the 711th Research Institute of CSIC. R & D work began in June 1996, with a 100-strong team of scientists and engineers led by Dr Jin Donghan being involved in developing the Stirling-cycle engine, while another team led Professor Ma Weiming of China’s Naval Engineering University began developing the all-electric AIP system. The two projects entered the production engineering stage in 2007, with the Shanghai Qiyao Propulsion Technology Ltd, a wholly owned subsidiary of the 711th Institute, becoming the principal industrial entity charged with producing the AIP system. Incidentally, the Type 041A SSK’s all-electric propulsion system is a derivative of a similar system that was developed about a decade ago for the PLA Navy’s six Type 093 Shang-class SSGNs and three Type 094 Jin-class SSBNs.—Prasun K. Sengupta
Posted by Prasun K. Sengupta at 6:54 AM

First and formost thanks for starting you blog, i like you blog for the details analysis which you provide.
Can you please write article on Indian UCAV development.

Previously in one of the blog i had asked you to restart you blog and you had responded saying that you have better work.

To Anon@4.27PM: Many thanks. I was, in fact, preoccupied with a turnkey project for the past 16 months and that was the reason I had to refrain from blogging. Now that the project has reached fruition I have the amount reqd for doing some serious blogging.
Regarding Indian UCAV developments, I'm afraid (from my personal viewpoint) India has a long way to go and given the existing material and financial resource constraints I don't expect indigenous UCAV solutions to emerge over the next seven years. To give you a few examples, a perfectly feasible plan for converting the SA.316B Alouette III into an NRUAV has now been dumped in favour of a financially unviable programme involving the development of an NRUAV derived from the Dhruv ALH. Secondly, all the money that has been WASTED thus far on the Saras twin pusherprop-powered aircraft (as if the IAF's commitment to ordering 16 aircraft will amortise the aircraft's R & D expenditure!) could easily have been spent over the past decade on expanding the Nishant family of UAVs and accelerating the R & D work on the Rustam. Instead, we are now being fed this bullshit about additional financial wastage to be incurred by NAL's totally unviable and uncalled for wet-dreams concerning 'indigenous' commuter turboprops and regional jetliners! How on earth can we even dream about developing UCAVs if we cannot even get our product R & D priorities right?

To Anon@6.55PM: Many thanks. You may have read portions of it at either the website of FORCE or TEMPUR a few months ago.

Good article. Regarding the Type 022, I am not sure if this is the exact model PN will be getting. According to various PN officials the FAC's PN has ordered are in 500ton category and Type 022 as you pointed out is around 225 ton. Perhaps a bigger model based on Type 022 design?

To Anon Above: I very much doubt the PRC's intention to export a 500-ton warship of this type, which has yet to enter service with the PLA Navy. In addition, a 500-tonne armed catamaran would be more of a corvette than a FAC-M. Besides, the Australian firm that helped design the Type 022 FAC-M catamaran has to date only designed 500-ton catamarans that are meant to be used as survey vessels. In fact, one Indian shipyard, Bharati Shipyard Ltd, has bought the design of such a 500-ton catamaran from this very Australian firm and is now fabricating a few of them for use as survey vessels.

on a totally different subject:

(b) would the same/similiar engine for the Tejas Mk II have some impact on the decision to go in for the F-18 D/E ?????

To Anon Above: What you choose to call 'delay' is considered routine within the Govt of India due to the extraordinarily cumbersome procedures in existence, and the mismatch in the style and speed of functioning between the MoD and MoF.
Regarding your second query, the answer is YES. Simply put, having a common engine in service for two types of frontline combat aircraft will simplify operational logistics and lead to greatly reduced procurement/product support costs.

After the TOT perhaps India may like to put the engines of F-18 on the AMCA.

Why install the F414 on the AMCA when the Kaveri (to be co-developed with SNECMA Moteurs) will be available by 2018?

Hi prasun, can you please provide us with the status of the Shaurya missile project and why it was not test fired again.
Also do you think the anti ballistic defense system being built by india will be good enough ( after all the hype around the successfull tests).

Thanks for the articles, can you please try to post more articles so that readers like me get get more quality information regarding our defense . We were missing the articles for almost 2 years now.

To Anon@5.52PM: Many thanks. The land-mobile Shaurya has completed its R & D phase and now awaits the decision for service induction. However, the Govt of India has yet to take the final call for its deployment.
Regarding the BMD system being developed by the DRDO, hype aside, application of common-sense means that an effective and functional BMD system must have a space-based element, i.e. early warning sensors that are networked to a BMD-specific C4I system. Now, as we all know, these two slements are still missing. Secondly, the PAD and AAD vehicles have to date been tested only against surface-to-surface battlefield support missiles like the Prithvi. More testing needs to be done by using Agni-1 and Agni-2 TBMs and IRBMs. Until all this is done, it would not be fair to claim that India has developed a full-fledged BMD system.

To Anon@5.53PM: Many thanks. Regretably, as fate would have it, last-minute developments in the neighbourhood have imposed certain deadlines in terms of my editorial commitments to FORCE magazine. Am now completing an analysis of the transformation process of Pakistan's nuclear deterrent forces, another one on naval infantry forces for India, another one on the PAF's force modernisation process vis-a-vis that of the IAF, and another one on the IAF's requirement for long-range standoff cruise missiles. However, will try to post some new items concerning the Arjun Mk2 MBT.
Some very interesting things going on indeed with the Arjun Mk1/2 programmes and one can rest assured that in the absence of such training aids for the T-90S MBT, the crews of the Arjun Mk1 are currently the most combat-proficient of all MBT tank crews of the Indian Army.

You insist that the PN is getting a Type 022 FAC when it is very evident that what they are getting is something much, much larger.

Why do you insist on writing fiction?