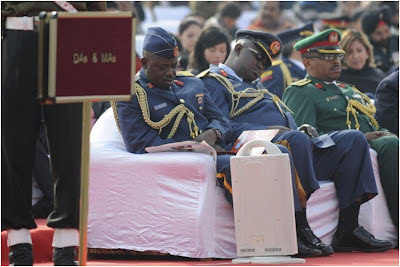 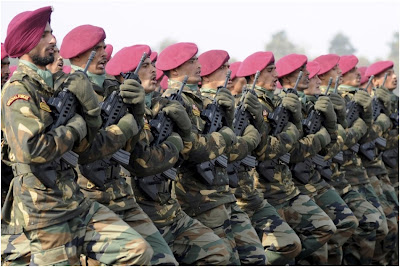 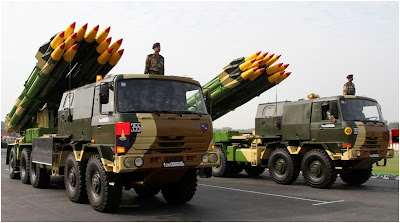 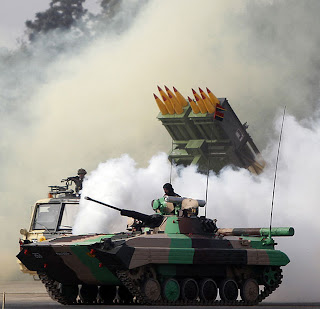 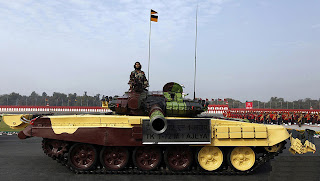 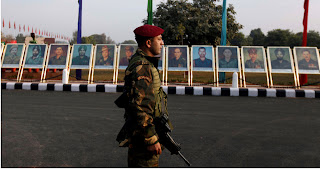 The 1st pic is hilarious!!!

The FA-50 MRCA of South Korea seems to be more advanced and capable than Tejas Mk1.

How do they compare???

What indigenous systems and tech in Tejas Mk1 are world class and significant that DPSUs and we can be proud of ?

Do you have any latest info on Astra BVRAAM and the 550Kms Brahmos that you claimed to have been approved...
When can they be operational???

Hi Prasun,
How are the Daksh bomb disposal robots working out??
Are they indigenous entirely or just assembled?

Sir,
Y do we use our special forces for guard duties at such ceremonies ?
y cant just the military police & other regular units do this ?
special forces definetely have better things to do than this.. :@

What does this mean...if the venture had been successful would it be advantageous to the typhoon??

The army wants to buy rifles with interchangeable barrels of different calibers, like 7.52, 5.56 and 6.68mm .

How can such rifle be practical?

What is the status of the Trichy Assault Rifle being developed by Tiruchirapalli Ordnance Factory?

Its a shame that we cant make our own Assault rifles.

It seems the deal which GLOBES released is not with India(MRSAM) like you assumed ..

any more guesses which other asian country will it be??

Prasun,
On December21 Prithvi-II missiles failed to take-off.
When will be scheduled again??

Will any SLBM(K-4) be tested this year?

Prasun, most people feel that opening up of the defense sector to private companies is the way to go.

This same argument was earlier used for the civil airlines, that it would instill competition for AI at the same time creating a vibrant industry. Alas AI still languishes, while the private airlines [bar indigo] are loitering on the brink. Most are hoping the government increases FDI, so they can quickly sell off their share to foreign airlines.

My question is there is nothing to stop this from happening in a critical area like defense which is likely to be opened to the private sector.

While I am not a wet blanket to private involvement I do feel dodgy/shadowy companies with no investment for the long term need to be sidelined. At the same time heavy restructuring of human resources and changing of mindsets is required in these DPSUs.

What are your thoughts on this.

To Anon@7.47AM: What’s even more hilarious is to see the Smerch-M’s & Pinaka’s rocket rounds painted like sugar-coated lollypops. Surely the Indian Army could have come up with a more menacing colour combination! The FA-50 & Tejas Mk1 are more or less on the same plane.

To Anon@7.57AM: The various sub-systems (like gearbox, on-board oxygen generation system, and on-board avionics LRUs like mission computer, pylons interface box, digital flight control computer, the integrated EW system, and accessories are all on par with the best available from abroad. However, in some of the most critical areas, like the environment control system, wiring connectors and wiring harnesses associated with the FBW flight control system, and some actuators, foreign off-the-shelf solutions were reqd. Credit must also go to TATA Advanced Materials Pvt Ltd for successfully coming with all-composite fuselage sub-structures, a task in which NAL totally failed.

To Anon@8.57AM: The Daksh is indigenous in terms of conception and design. Majority of its components are sourced locally from several private SMEs.

To Anon@9.59AM: There are several functions for SOF formations, and providing proximate and perimeter security is one of them. Police units also provide security but at various outer levels, when it comes to proximate security.

To Anon@11.41AM: If it involves the Green Pine then the customer is South Korea, since Seoul is procuring the Arrow 3-based BMD network.

To Anon@12.19PM: Who gives a damn about a missile (Prithvi-2) that has not even entered service nor is it likely to enter service? I guess only the DRDO gives a damn since this missile continues to be fired only for the sake of fireworks & meaningless glory. The K-4 SLBM is still under development and will be available for test-firing only by 2014 at the earliest.

To KSK: What is so impractical about it? After all, the barrels will be changed not in the thick of battle, but PRIOR to making contact with the enemy, which gives the user plenty of time to change the barrels as per the mission’s reqmts. As for the Trichy TAR, even if the armed forces don’t go for it, it will have a huge market (going to more than a million) among the Central Armed Police Forces (CAPF). It is not about India being unable to make its own families of small arms, but about being or not being able to complete the developmental cycles in time. Let me give you an example: India was the first Asian country to have indigenously developed a number-crunching computer as far back as 1952. The two parties that developed it were the TATA Institute for Fundamental Research (TIFR) & the Indian Statistical Institute (ISI). And elaborate plans were made to build upon this pioneering success so that by the 1960s India would have been am IT force to be reckoned with before even the emergence of IBM. But it was the bureaucrat sitting in the corridors of power in Delhi that squashed all such ambitions by 1955 when it was stated that the ISI’s charter of duties did not include the development of computers. That’s how innovation was deliberately destroyed during the early years after independence! And over the years this culture has become so ingrained that hardly any of these so-called navratna DPSUs engage in any meaningful fundamental R & D aimed at introducing world-beating innovative solutions.

To Anon@4PM: Let’s first get the facts right. Private airlines were allowed in India NOT for the sake of ‘vibrantly’ competing against state-owned airlines, but for adding to air transportation volumes/capacity at a time when the govt was unable to provide the funds necessary for the growth of AI or IA. For competition to take place, there has to be a level playing field. In AI’s & IA’s case, there was no level playing field simply because these two airlines were govt-owned, meaning when it came to taking crucial decisions on fleet modernisation/expansion and seeking funds for such purposes, the private airlines were free to raise funds from the capital markets, while AI & IA were prevented from doing so due to bureaucratic controls. Had both AI & IA become public-listed companies (through a divestment exercise, thereby becoming privatised entities), then one would have had a level playing field and this would have led to healthy competition with other private air carriers. The private airlines today are loitering on the brink of financial insolvency due to the cost-prohibitive fuel surcharges being levied by the Govt. Remove these surcharges and the airlines won’t require any FDI. But the Govt is levying such surcharges in order to fund hundreds of unproductive and unviable welfare schemes like NREGA, and to bail out those states that are already financially bankrupt (like West Bengal). In other words, the Govt wants to carry on with its discredited ‘welfare state’ policies, instead of cracking the whip and demanding that non-performing states either shape up or disappear . The same type of argument applies to the DPSUs versus the private sector. The govt knows fully well that the DPSUs aren’t coming up with any technological innovations simply because the MoD does not have the kind of money to spend on fundamental R & D. Therefore, what the govt is hoping that the private sector, in cooperation with its foreign counterparts, steps in to fill the financial void but in a discredited manner, meaning that the DPSUs will always be the prime contractors. In other words, the MoD wants to have the entire cake & eat it as well. However, in today’s globalised world, things won’t happen as envisaged by the MoD, and India-origin MNCs like TATA, L & T and M & M are more than free to work as prime contractors in weapons development for countries OTHER THAN India and in locations OUTSIDE India, comething the bureaucrats within the MoD haven’t yet comprehended.