A Dream Come True For The IAF

Back in 2007, when the Indian Air Force (IAF) began work on commissioning its advanced landing grounds (ALG)—spread along the rolling valleys and hills in the mountainous and forested northwestern and northeastern regions of India, it soon realised that some of these ALGs, with modest upgradations, could also serve as peacetime locations housing dedicated intelligence, surveillance and reconnaissance (ISR) platforms on temporary deployments. The only item lacking at that time was the availability of high-wing STOL turboprop aircraft equipped with ISR sensors and mission management suites. Specifically, the IAF wanted a platform that could overcome the otherwise unmanageable clear air turbulence owing to mountain waves, low-level wind shear, and low clouds, and which could easily take off from and land on ALG located at altitudes of between 4,000 feet and 6,200 feet, and whose runways have a length of between 3,600 feet and 4,200 feet and a width of between 60 and 75 feet (which is half that of a normal runway), and which, unlike conventional airfields, are not equipped with stopways, overruns and undershoots.
It would now appear that the IAF’s prayers have finally been answered. For, on June 21 at the on-going Paris Air Show in Le Bourget, Airbus Military and Israel Aerospace Industries (IAI) decided to combine forces to jointly develop and market a new version of the Airbus Military-built C-295 platform fitted with a fourth-generation airborne early warning and control (AEW & C) system produced by ELTA Systems, a wholly owned IAI subsidiary. The primary sensor of this AEW & C platform will be a 360° rotating AESA-based multi-mode radar that will also be capable of conducting ground surveillance and real-time moving ground target indication from standoff distances. A Memorandum of Understanding (MoU) to this effect was signed at the Le Bourget Airshow by IAI Corp’s VP and ELTA President, Nissim Hadas, and Airbus Military CEO Domingo Ureña. The network-centric C-295 AEW & C is being designed to provide high-quality 360° surveillance for creating in real-time an integrated air, ground and maritime ‘Situation Picture’ and the electronic order of battle. A C-295 fitted with a rotodome demonstrator has been conducting flight-trials from Airbus Military’s Seville facility since June 8. Initial tests have shown that the aircraft is aerodynamically an excellent platform for this purpose. ELTA Systems and Airbus Military are now conducting engineering studies to integrate the mission suite, including the rotodome-mounted AESA radar and EADS/CASA’s seven-man FITS mission management suite, into the aircraft. In order to optimise the platform for operating in and out of ALG-type airfields, the C-295 AEW & C will come equipped with a chin-mounted FLIR. It will also house a belly-mounted radome housing a 360° rotating inverse synthetic aperture radar, which will perform ground-mapping and ground target profiling operations.
As per the IAF’s future force structure projections, at least six such platforms are required for supplementing the existing fleet of three A-50EI PHALCON AEW & C platforms. A follow-on order for two additional A-50EIs was placed by India’s Ministry of Defence with IAI last March.—Prasun K. Sengupta
Posted by Prasun K. Sengupta at 5:49 AM 55 comments: 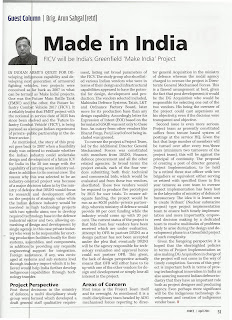 Has The China-Pakistan Combine Checkmated India At Both Strategic & Operational Levels Along The Northern Front? 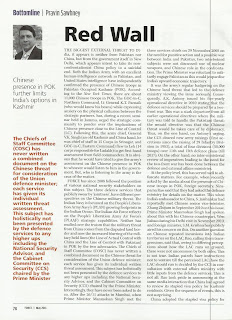 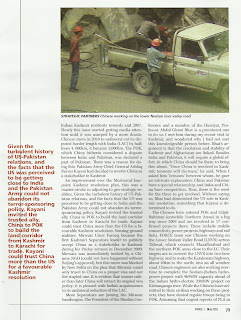 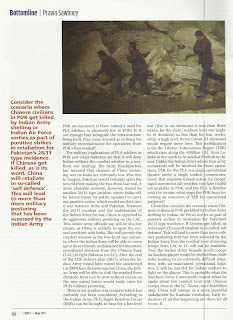 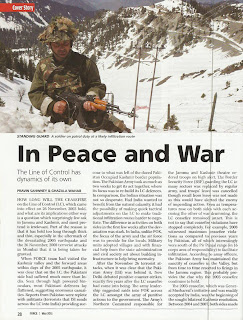 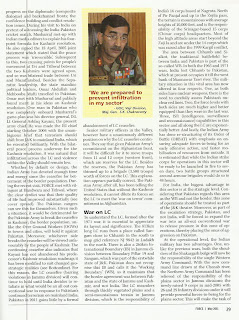 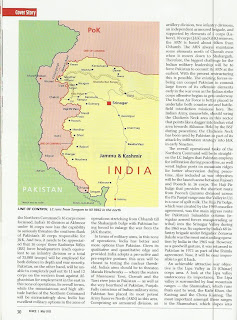 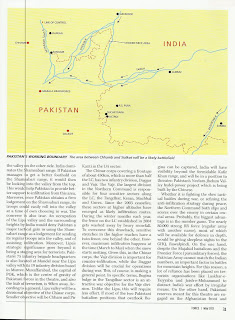 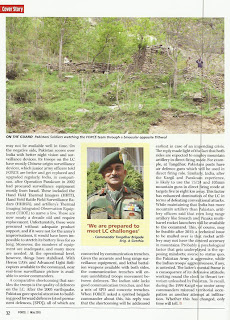 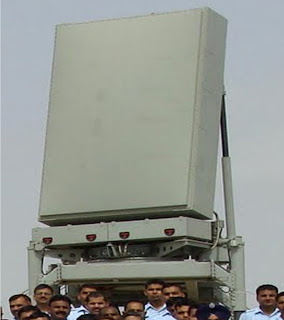 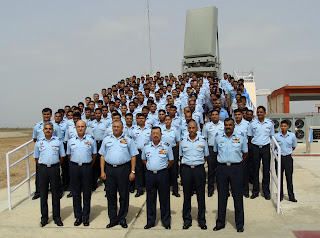 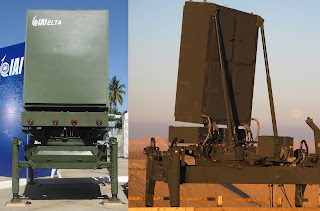 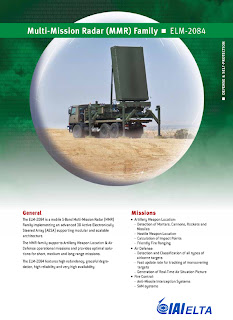 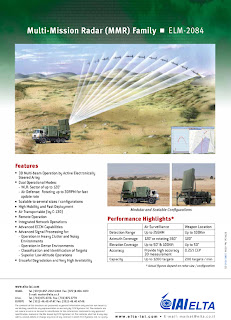 The Arudhra medium-power radar (MPR) is after all the ELTA Systems-built EL/M-2084 MMR, whose full-scale replica was displayed at the Aero India 2011 expo in Bengaluru last February. The two sets of visuals above (Arudhra on top, followed by the EL/M-2084 shown in Bengaluru) clearly confirm that. Thus far, neither the DRDO nor BEL have claimed that the Arudhra is a product developed and made in India. Unlike airspace surveillance/air traffic management radars, the Arudhra-EL/M-2084 is an early warning/target engagement radar that will be employed by the IAF for providing early warning of inbound tactical ballistic missiles and cruise missiles (both air-launched and ground-launched). A total of 34 such MPRs have been contracted for thus far by the IAF (the orders were placed during the 2009 Paris Air Show) for installation in and around Jamnagar, Mumbai and the National Capital Region, to begin with. The EL/M-2084 MMR is also employed as  the RAZ weapon locating radar by the IDF Ground Forces, and the Indian Army is soon expected to place orders for this land-mobile system, since the DRDO-developed and BEL-built WLR, reported to be under development since late 1999, has yet to see the light of day.


The AESA-based EL/M-2084 addresses an emerging requirement to include all land-based radar functions into one operational unit. The MPR combines a weapons locator radar and an air-defence radar to detect ballistic and cruise missiles, MBRL rockets, rounds fire by field artillery howitzers and mortars, calculates the anticipated impact and launching points, and provides target data to the relevant air-defence weapons systems. The MPR is land-mobile and scalable in order to meet different performance requirements. Scaling is performed by means of an antenna of varying physical size and the amount of transmit-receive module content. The current orders from the IAF include three different versions of the MPR.
And posted below is the official press release of the MoD’s Directorate of Public Relations, which should put to rest all doubts about the origin of the Arudha MPR.
“In the background of Commanders’ Conference at Headquarters South Western Air Command (SWAC), Air Chief Marshal PV Naik PVSM VSM ADC inducted the first Medium Power Radar (MPR) named ARUDHRA at Air Force Station Naliya. CAS was accompanied by Air Marshal A K Gogoi AVSM VSM, AOC-in-C South Western Air Command. The Arudhra radar is being inducted to replace the ageing (THALES-built) TRS-2215 and (BEL-built) PSM-33 radars on the inventory of IAF. The radar is state-of-the-art technology capable of detecting targets at ranges greater than 300km and it is an important component in the IAF's plans to achieve net-centric operations. The radar would strengthen air-defence in the Saurashtra-Kutch region. The Arudhra is being inducted in a signals unit which has rich historical legacy. The unit was raised in October 1966 in Jodhpur and moved to Naliya in Jun 1988. At Naliya the unit has played a pivotal role in the air-defence of Saurashtra-Kutch region. The event was attended by a large number of Air Force officers from Air Headquarters, Headquarters South Western Air Command, including the representatives of original equipment manufacturer ELTA Systems Ltd, from Israel. IAF fighters conducted a fly past brilliantly synchronised with the induction of radar by Chief of the Air Staff”. 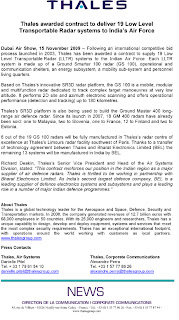 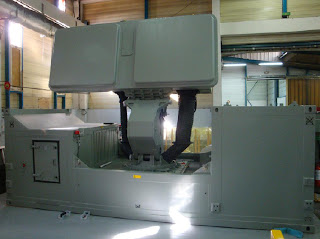 Also being inducted by the IAF are the THALES-built GS-100 LLTRs, following the DRDO’s failure to develop an indigenous substitute.—Prasun K. Sengupta
Posted by Prasun K. Sengupta at 5:03 AM 51 comments: 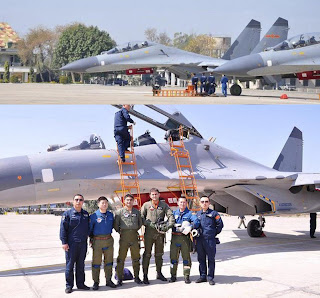 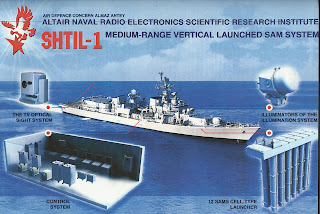