A Must-Read For All Submariners 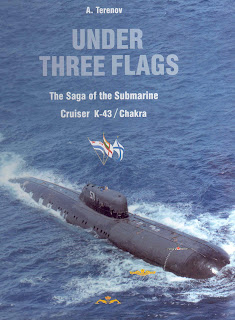 This is the first and only definitive account  the dry-leasing of the Project 670 Skat/K-43 INS Chakra/S-71 SSGN, written by Capt Alexander Ivanovich Terenov and titled titled Under Three Flags The Saga of the Submarine Cruiser K-43/Chakra, which is now available in English after being translated by Vice Admiral (Retd) R N Ganesh, INS Chakra’s first Captain. Since this book is a translation from the original Russian script, both the Indian translator and its publisher are outside the purview of India's Official Secrets Act of 1923, which would otherwise have been applied against both had the narrative been of totally Indian origin. What this book reveals are the following:

· A detailed account of the origins of India’s quest for acquiring the Project 670 Skat/K-43 Chakra SSGN, beginning in 1982 when the then Rear Admiral V P S Shekhawat a pioneer submariner trained in UK and who later became the Chief of Naval Staff (CNS), inspected the K-43 in 1982 in Murmansk and recommended its dry-lease. The book describes how the K-43 was tropicalised at the Zvezda Shipyard, and how the three Indian Navy Captains-designate R N Ganesh, S C Anand and R K Sharma along with their three sets of crew complements (whose training programme began in batches from 1985 and involved 100 days of supervised underwater operations), operated the K-43 for the three years of the dry-lease. Though the K-43 had 70 crew-bunks, it at times had a crew complement of 200. During one training sortie the SSGN was continuously at sea for 13 days.

·  The writer, then as a young Captain 3rd Rank Terenov, was appointed as Commanding Officer of K-43 in 1983 for type-rating the Indian Navy’s submariners for the K-43 at the training centres at Obininsk, Kamchatka and Vladivostok’s Vtoraya Rechka suburb of Vladivostok and the nearby Bay of Ulysses. Captain 1st Rank Dmitri Sergeivich Kasper Yust was appointed CO of the training centre, with the entire type-rating and SSGN operationalisation schedule being supervised by Admiral A A Belousov through to April 1986.

· The K-43’s final dry-lease contract was due for signing by July 1987, followed by commissioning in December 1987 at Vladivostok. However, at the last minute, the Kremlin had second thoughts about allowing foreigners on board the K-43, ostensibly due to pressure applied on Russia by the US. About 10 days after this happened, the then Indian PM Rajiv Gandhi made a personal plea to the then Soviet Communist Party’s Secretary-General Mikhail Gorbachev, following which the ban imposed on the Indian submariners was lifted and they were allowed back into the SSGN.

· The K-43, by then already 20 years old, was finally commissioned as S-71 INS Chakra on January 5, 1988 as part of the Navy’s 6th Submarine Squadron at a low-key ceremony held in -25 degrees Celsius by the then Indian Ambassador to the USSR, T N Kaul and the C-in-C of the Soviet Navy’s Pacific Fleet, Admiral G A Khvatov. While positioned in the South China Sea en route to Vizag, the submerged S-71 was met by an Indian Navy escort vessel and as the two of them entered the Singapore Straits, the S-71/Chakra had to surface while transiting the Malacca Straits, during which she was first photographed by the P-3C Orions of the RAAF that were operating out of TUDM Butterworth air base off Penang, as part of the ANZMIS arrangements.

· S-71/INS Chakra was used extensively, travelling 72,000 nautical miles (133,000km), and the SSGN’s PWR remaining active for 430 days during a three-year period (rather low by Western standards). Five Ametist-15 (SS-N-7) anti-ship cruise missiles and 42 torpedoes were fired, all under Russian supervision. An accident on board the SSGN in 1989 resulted in a fire breaking out and loss of on-board power, but was successfully contained, there was no radioactive leakage to the SSGN or the environment, and the vessel succeeded in returning to Vizag on its own power. Subsequent repairs at Vizag supported by representatives of the Afrikantov Design Bureau took three months to complete.

· The book describes for the very first time the layout of the berthing facilities and the Shipbuilding Centre (SBC), plus related logistics facilities located alongside such as a navigation systems/sensors repair workshop, a three-storey decontamination and radioactive safety service building, captive power-generation installations, high-pressure air and chilled water storage tanks for air conditioning, and shore-based accommodation facilities for the SSGN’s crew complement.

· In 1990, India had requested an extension of the SSGN’s dry-lease, but this was refused by the Kremlin. She subsequently went back to Vladivostok in January 1991 while being escorted by an Indian Navy AOPV, under the command of Captain R K Sharma, who is presently serving with India’s National Security Council Secretariat.
Posted by Prasun K. Sengupta at 2:27 AM 73 comments: 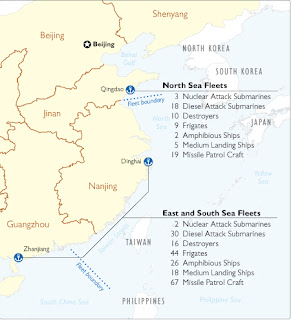 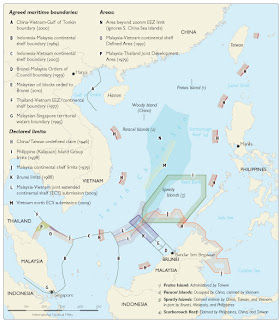 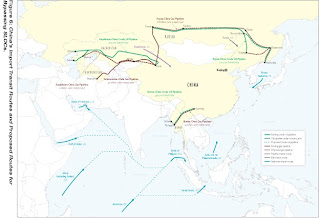 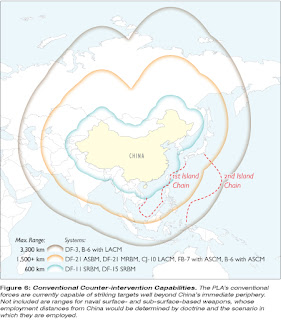 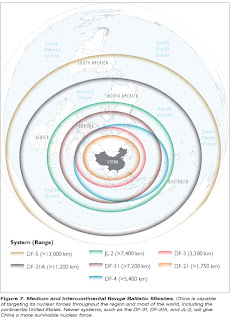 The Beijing-Kunming Expressway in China’s Sichuan province (bordering northeastern India) linking Yaan to Xicang was commissioned into service on April 28, 2012. 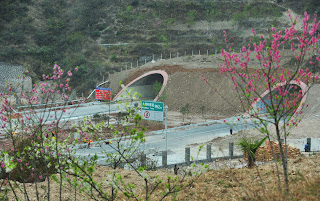 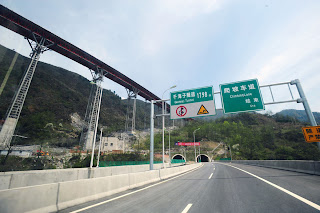 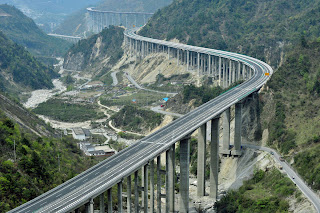 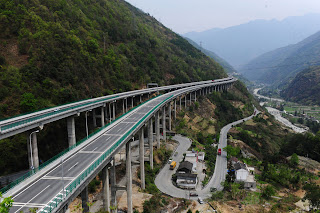 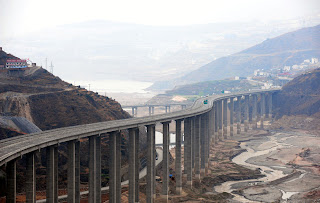 Pakistan, meanwhile, will order four additional 3,000-tonne F-22P guided-missile frigates (FFG) that will all be licence-built in Pakistan at a cost of US$200 million. Thus far, the Pakistan Navy (PN) has inducted into service three F-22P FFGs (all built at Shanghai’s Hudong Zhonghua Shipyard), while the fourth one is being licence-built by Karachi Shipyard & Engineering Works (KSEW).  The first F-22P FFG, PNS Zulfiquar, was commissioned on September 19, 2009, and the second, PNS Shamsheer, on December 19, 2009. The third FFG, PNS Saif, was commissioned on September 15, 2010, while the fourth FFG, PNS Aslat, will be commissioned next year. 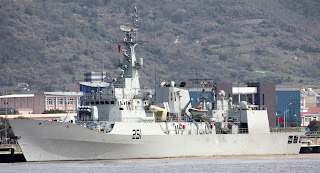 The PAF’s JF-17 Thunder MRCA, meanwhile, has commenced flight validation trials for the WMD-7 laser designation pod at Chengdu. The photo below shows the JF-17 equipped with an optronic calibration pod in lieu of the actual WMD-7 pod being fitted. 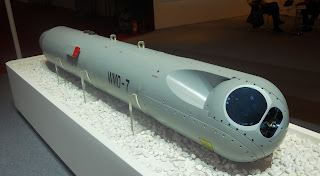 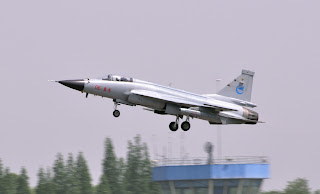 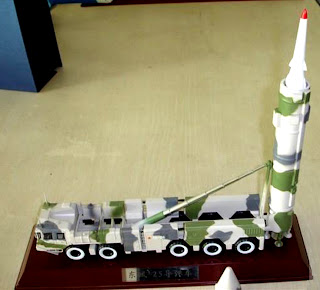 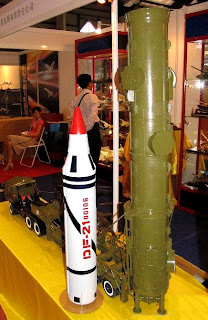 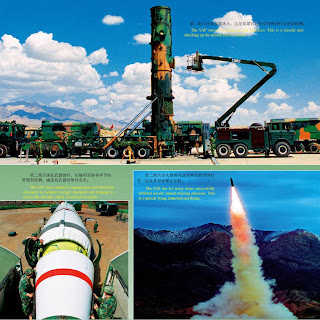 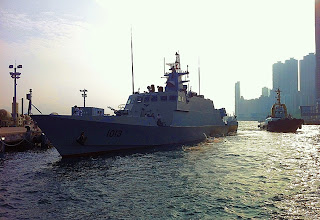 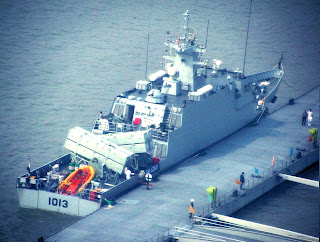 It may be recalled that the Pakistan Navy’s (PN) Chief of the Naval Staff, Admiral Muhammad Asif Sandila, was on April 23, 2012 the chief guest at the commissioning ceremony of PNS Azmat, Pakistan’s first fast attack craft (missile) at the Xinggang Shipyard in Tianjin, China. Admiral Sandila said that the contract for acquiring FAC-Ms included the construction of a second FAC-M in Pakistan by the end of 2012 by Karachi Shipyard & Engineering Works (KSEW). It may be recalled that the PN’s then Chief of the Naval Staff Admiral Noman Bashir was the Chief Guest on September 20, 2011 at the launching ceremony of PNS Azmat at Xingang Shipyard. Each FAC-M, displacing 260 tonnes and armed with eight C-802 anti-ship cruise missiles, is manned by a crew complement of 20. It was in late February 2010 that the PN had issued a restricted tender to the state-owned China Shipbuilding & Offshore International Company Ltd (CSOC) for the procurement of two FAC-Ms that would each have a length of 60 metres, radius of action equal to or greater than 500 nautical miles, maximum speed of 30 Knots, and be equipped with a surface/air search radar, optronic fire-control director, twin 25mm machine guns, a 30mm machine gun, and countermeasures dispensers.

In December 2010, Xinggang Shipyard was selected to fabricate the two FAC-Ms. Keel-laying of PNS Azmat, costing some US$50 million, took place on March 1, 2011. Its harbour trials commenced in October last year. The second FAC-M is now being fabricated under licence at KSEW. 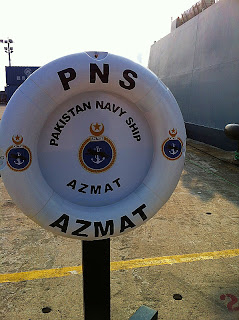 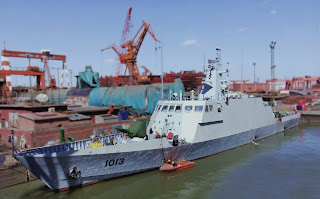 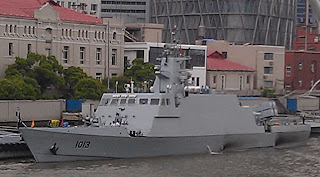 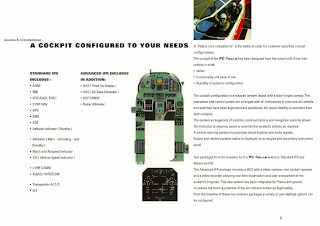 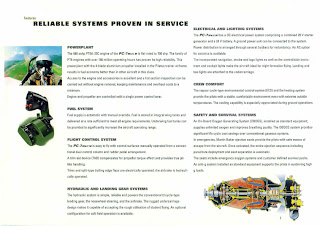 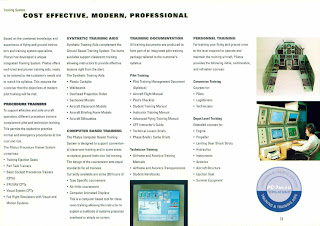 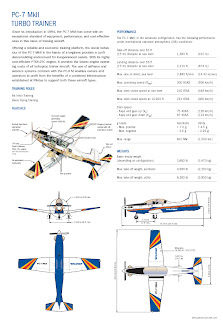