China’s People’s Liberation Army Air Force (PLAAF) has taken the first concrete step towards the establishment of a national ballistic missile defence (BMD) system with the construction of an initial two long-range C-band active phased-array radar systems (LPAR). The first such LPAR is already operational north of Huian in Fujian Province, facing Taiwan, while the second LPAR is now being built in Sichuan province, meaning it will be India-specific. 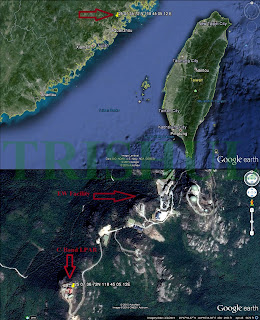 The LPAR north of Huian is made up of a single octagonal antenna-array of a CEIEC-developed C-band active phased-array radar that is located at Dongjing Shan, which is close to the PLAAF’s Huian-based electronic warfare (EW) facility in Fujian Province. This EW facility has been optimised to cause electronic degradation of Taiwan’s UHF-band Raytheon-supplied FPS-115 LPAR system at Leshan Mountain in Hsinchu County. 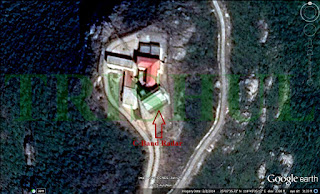 Construction of the PLAAF’s first new-generation LPAR commenced in 2008, and its hilltop-mounted octagonal fixed-array is boresighted along an azimuth of approximately 144 degrees. With an assumed coverage of +/-60 degrees in azimuth, this LPAR is theoretically capable of monitoring the entire Taiwan Strait region, as well as the southern approaches to the South China Sea. This LPAR can thus be used for providing long-range coverage extending north to Japan and to The Philippines. 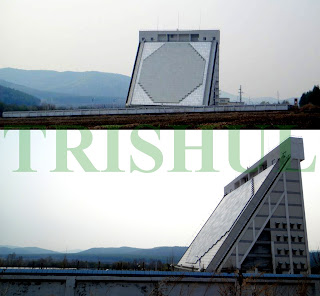 So far, China has not yet revealed the design of the LR-SAM that will be used for BMD, but it is estimated that the final end-product, still undergoing development, will bear a close resemblance to Russia’s 9M82 and 9M83 family of hyper-velocity LR-SAMs. 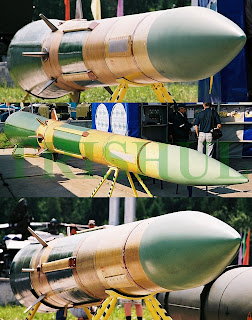 Taiwan’s FPS-115 LPAR has been fully operational since February 2013. Its procurements origins date back to 2000 when its sale was approved by the Clinton Administration under the Surveillance Radar Programme (SRP). Competing against Lockheed martin, Raytheon won the $800 million contract in 2004 and began sub-systems deliveries in 2009. Construction delays due to landslides and technical issues forced Taiwan to agree to pay an additional $397 million in charges to finish the SRP, which has been described as being one of the most unique long-range airspace surveillance systems ever built. Japan is now attempting to catch up with the fielding of Raytheon-built AN/TPY-2 long-range, X-Band air-defence radars, which were originally designed as ground-based mobile target acquisition-cum-engagement radars for the Terminal High Altitude Area Defense (THAAD) system. 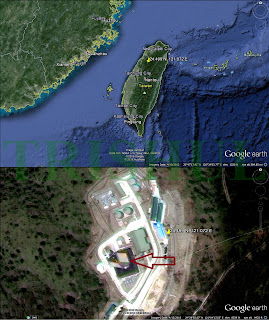 This LPAR is reported to have a range of 5,000km (3,100nm), and it is able to track a golf ball-sized target out to 3,000km. Taiwan can see almost all of China’s significant combat aircraft sorties and exercises from this radar. The requirement for such a powerful surveillance platform came about at China’s instigation. During the 1995-1996 Taiwan Strait missile crisis, China had launched ten DF-15 short-range ballistic missiles (SRBM) into the waters north and south of Taiwan. The intent was to discourage Taiwan from conducting its first democratic elections, but it failed. The US had then responded by sending two aircraft carrier battle groups to the area as a show of support. At that time, the PLA’s 2nd Artillery Corps had approximately 350 DF-11/DF-15 SRBMs, but today that number is about 1,100. Taiwan responded to the threat by procuring three Batteries of Raytheon MIM-104 Patriot Advanced Capability-2 (PAC-2) LR-SAMs for $1.3 billion. These were stationed around the capital city of Taipei, leaving much of the central and southern part of the island unprotected, except for a US-supplied air-defence missile system (supplied by GTE-Sylvania) in the late 1980s and using Taiwan-developed LR-SAMs, with the entire system being known as the Tien Kung 2 (Sky Bow-2). 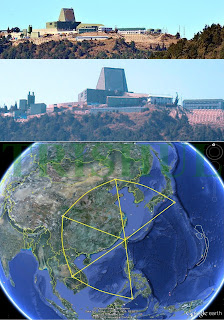 Though Taiwan’s military and the US Pentagon pushed Taiwan to proceed with the procurement of the MIM-104 Patriot PAC-3 systems, domestic politics in Taiwan slowed progress on the deal until 2007, when the US released a ‘Patriot Configuration 2 Ground Systems Upgrade’ for the older PAC-2s for $939 million. In 2008, the US released 330 PAC-3 missiles, and in 2010, the US released an additional 114 PAC-3 missiles. 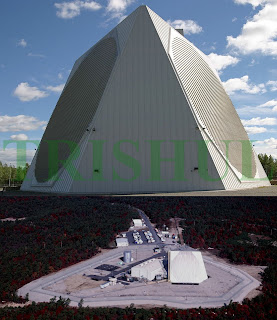 The US Air Force’s Defense Security Program (DSP) reportedly has real-time access to the data collected by Taiwan’s FPS-115 LPAR. The DSP monitors ballistic missile launches and nuclear detonations worldwide. The US in turn has reportedly given Taiwan free real-time access to early warning alerts generated by the DSP’s SBIRS satellite constellation since the last 10 years as quid pro quo.

It was on December 15, 1963 that Chairman Mao Zedong said that China’s military strategy was defensive in nature, and therefore China should develop defensive (strategic) weapons as well as offensive weapons such as nuclear weapons and their delivery platforms. On February 6, 1964, during his meeting with Dr Qian Xuesen (the Father of Chinese Rocketry), Mao again expressed his views on the importance of ballistic missile defence (BMD) capabilities. This conversation, later known as ‘640 Directive’, cascaded to China’s military-industrial and R & D infrastructure as Mao’s order to develop a BMD system. On March 23, 1964, more than 30 top scientists of China attended a meeting organised by the Commission of Science, Technology & Industry for National Defence (COSTIND) in Beijing to discuss the feasibility of a BMD system. On May 10, 1965, the Central Special Committee issued a notice to the 4th, 5th, 6th and 7th Ministry of Machinery Industry, China Academy of Science, PLA’s 2nd Artillery Corps, and Base 20, asking them to list BMD in their annual and long-term plans. A plan BMD development submitted by COSTIND was approved by the Central Special Committee in August 1965. On February 23, 1966, COSTIND organised another conference to outline detailed R & D plans for the proposed BMD system, which was given a codename ‘Project 640’.The plan called for the total R & D endeavour to be divided into five key sub-areas. Key elements of the project included the ‘FanJi’ (Counterattack) family of interceptor missiles, the Xian Feng (Pioneer) anti-missile super gun, and a land-based ballistic missile early warning network. The meeting also decided to speed up the building of a dedicated BMD test-range and the development of the nuclear warhead for the ‘Fanji’ missile. Full-scale development work commenced in the early 1970s. Under the instruction of the then Chinese Premier Zhou Enlai, the 2nd Academy of the 7th Ministry of Machinery Industry (later the Ministry of Aerospace Industry) was officially renamed as the Academy of Anti-Ballistic Missile & Anti-Satellite in 1969, and became the nodal institution for developing a functional BMD system. Its subordinated 210 Institute was charged with developing of the anti-missile super gun. Shanghai Institute of Optics & Fine Mechanics was responsible for the development of a high-power anti-missile laser. The 2nd Academy also began to develop the anti-satellite (ASAT) weapon technology in the early 1970s. Project 640, however, faced enormous technical and financial difficulties from the very beginning. China, troubled by its financial hardships and internal political turmoil due to the ‘Cultural Revolution’, was simply unable to support an expensive R & D endeavour like this. Additionally, the 1972 Anti-Ballistic Missile Treaty between the US and the USSR and later the scrapping of the US Safeguard ABM system made a Chinese BMD network seemingly unnecessary. After Mao’s death in 1976, all related R & D work began to slow down. In March 1980, China’s paramount leader Deng Xiaoping decided to terminate the entire project.

The FanJi-1 was a two-stage, semi-active radar-homing, hypersonic interceptor missile designed to intercept ballistic missile warheads at low- to medium-altitudes. The first-stage of the missile used liquid propellant and the second-stage used solid propellant. The missile was 14 metres in length. Flight tests of two dummy missiles were carried out successfully in August and September 1979. Between October 1971 and April 1972, the 2nd Academy conducted six flight-tests of a 1:5 scale-model of the FanJi-2 low-altitude interceptor missile, with five of them being successful. R & D work on this missile was terminated in 1973. The FanJi-3 high-altitude interceptor missile was proposed by the 2nd Academy in 1974, but all R & D activity ceased in 1977.

The ‘XianFeng’ super gun developed by the 210 Institute was given the codename ‘Project 640-2’. Initial research was carried out on a 140mm smoothbore cannon, which fired a 18kg projectiles to a maximum distance of 74km. First proposed in January 1967, the ‘Xianfeng’ was 26 metres in length and weighed 155 tonnes. Mounted on a fixed gun-rack, the 420mm-calibre super gun was designed to fire 160kg unguided rocket-propelled projectiles to intercept incoming nuclear warheads. Various test-firings were carried out in the early 1970s, but the design proved to be impractical. All R & D work was put on hold in 1977, and was followed by project termination in March 1980.

R & D work on a ground-based ballistic missile early warning radar network was much more productive. Phase-1 of this project included six early warning stations located in Khashi, Nanning, Kunming, Hainan, Jiaodong, and Xiangxi; and a command-and-control centre in Weinan (No.28 Station). Later, the network also included a data-processing station codenamed ‘Qin Ling’, a tracking station codenamed ‘Chang Jiang’, a land-mobile tracking station codenamed ‘Qian Shao’, a second land-mobile tracking station codenamed ‘Huang He’, and an additional early warning station codenamed ‘Chang Cheng’, located in Changchun. Key elements of the early warning network included a Type 7010 passive phased-array early radar and a Type 110 monopulse missile tracking radar. The Type 7010 radar was developed by the Nanjing-based 14th Electronic Institute between 1970 and 1976,. The 40-metre by 20-metre radar antenna was built on the Huangyang Mountain slope 1,600 metres above sea level in Xuanhua, Hebei Province, about 140km northwest of Beijing. A second site was built in Henan Province. These radar sites were abandoned in the early 1990s. The Type 110 radar was developed jointly by 14th Electronic Institute and the Electronic Institute of the China Academy of Science in the 1970s. The radar antenna was 25 metres in diameter, weighed 400 tonnes, and was housed in a large radome measuring 36.5 metres in height and 44 metres in diameter. The radar became fully operational in 1977, with only one station built at the Zhanyi Space/Missile Tracking Station in southern Yunnan Province. Following the cancellation of Project 640, this radar became part of China’s space tracking, telemetry and command (TT & C) network in the 1980s.

New Delivery Systems On The Anvil 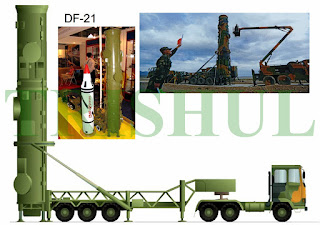 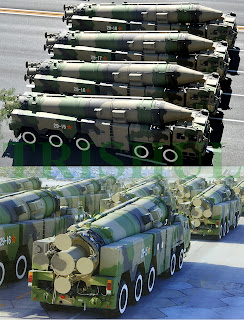 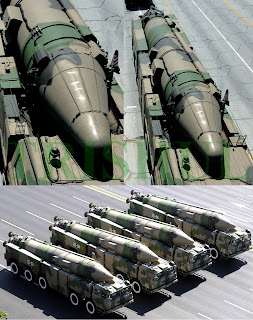 The DF-21Cs are now deployed 230km west of Delingha in Qinghai Province. The DF-21Ds are deployed in Yunnan Province. 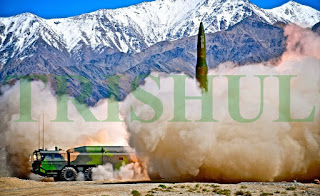 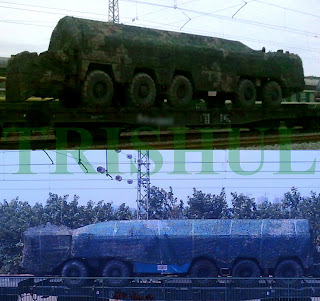 In addition, a new-generation road-mobile 4,000km-range MRBM is now under development and its maiden test-flight is due for later this year. 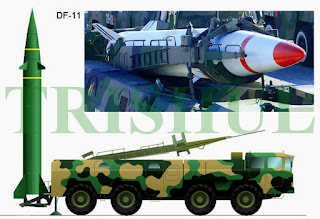 Lastly, an extended-range (1,800km-range) version of the CJ-10 GLCM is now being flight-tested. Mounted on a 12 x 12 TEL that also has a built-in SATCOM system, this new cruise missile (two missiles per TEL) will supercede the existing 1,000km-range CJ-10 GLCMs that are fired from 8 x 8 TELs each of which carry three cannister-encased CJ-10s. 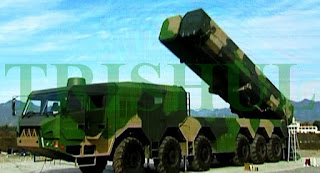 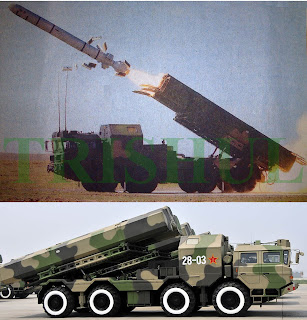 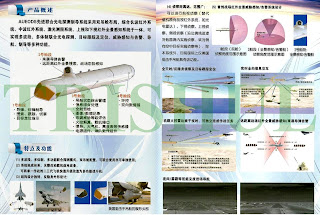 The above is a laser designation pod that also mounts an integral IRST sensor. 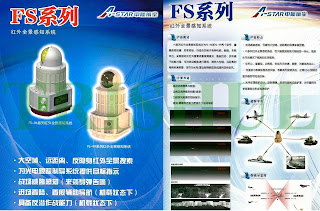 Shown above and below are IRST sensors that have multiple mounting options, ranging from combat aircraft to helicopters and warships.

Shown below are multi-function optronic turrets with various mounting options. 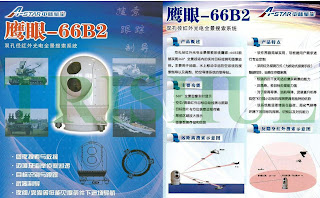 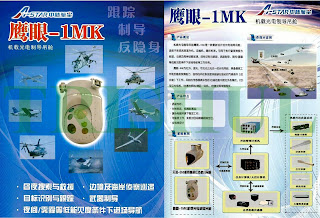